Passive RFID is a term used to describe RFID tags that do not have a battery or other internal power source. Instead of a battery, Passive RFID tags rely on the energy received from the RFID reader and its antenna for power. When the RFID reader scans the area for RFID tags, it sends out an electrical signal, which is converted into electromagnetic RF energy by the RFID antenna, and that energy is used to power the RFID tags in the read area. RFID tags need a very small amount of energy to power their internal RFID chip and send a response with the programmed information. To read more in depth about the physics involved in Passive UHF RFID, read our article "RF Physics: How Does Energy Flow in an RFID System?"

Because Passive RFID is a battery-free technology, the tags will never be reliant on battery power or restricted by the short lifespan of a small battery. Additionally, Passive RFID tags can be purchased for a very low cost - only a few cents for UHF RFID tags, which wouldn’t be possible if a battery was included in the tag. Active RFID is the exact opposite and is a type of RFID technology that uses a battery to power each RFID tag. Because each battery’s lifespan is limited, and the tags are much more expensive, the use of Active RFID is not as widely adopted as Passive RFID.

All radio waves/electromagnetic waves are emitted within a certain frequency range. For example, an FM radio receives radio waves emitted between 88 MHz - 108 MHz, and we can tune our radios to listen between certain frequencies in that range to find a specific station on a specific frequency. RFID operates in a similar way, except RFID readers automatically switch between frequencies within a certain range extremely quickly in order to pick up RFID tag responses on all available frequencies. There are three main frequency ranges used by Passive RFID systems - Low Frequency, High Frequency, and Ultra-High Frequency.

Low Frequency: Low Frequency (LF) RFID is emitted in the 30 - 300 kHz range, but most LF tags primarily operate on the 125 kHz band (specific frequency band) or the 134 kHz band. Because radio waves within this frequency range are only able to transmit a short distance (only a few inches) only one or two bands can be used without fear of one system interfering with another.

High Frequency: High Frequency (HF) RFID is emitted in the 3 - 30 MHz range, but most HF tags primarily operate on the 13.56 MHz band. Similar to LF, HF is a type of short range RFID, only able to transmit at a few inches and up to about a foot, so using one singular band works well. Near-Field Communication, or NFC, is a type of High Frequency RFID, which is extremely popular for data sharing and contactless payments.

Ultra-High Frequency: Ultra-High Frequency (UHF) RFID is emitted between 300 MHz and 3 GHz, but most UHF RFID tags transmit on the main range of 860 - 960 MHz, as well as on a less frequently used band of 433 MHz. The larger band of 860 - 960 is a global band that is further subdivided into smaller bands that are region specific. For example, the US operating region is limited to the 902 - 928 MHz range. To learn more about your country’s operating region and frequency band - read our article “How to Conform to Regional Regulations when using RFID”.

Passive UHF RFID tags can generally be read on average about 20 - 30 feet in distance, depending on the tag size and environment. Smaller UHF RFID tags (usually inlays less than 2” in width) generally have a shorter range, somewhere between 3 - 5 feet. Passive UHF RFID tags, however, do not have the long range that Active tags or Battery-Assisted Passive RFID tags have, which can be anywhere from 50 - 250 feet of receive distance. The benefit of extremely long range RFID capabilities that Active tags and Battery-Assisted Passive tags is very often outweighed by the high cost per tag and limited lifespan.

Passive HF/NFC RFID tags can generally be read on average about 6 inches away, and Passive LF RFID tags can only be read at a maximum of 2-3 inches away. This is because both HF/NFC and LF tags are short range RFID technology that are powered by a magnetic field created between the reader and the RFID tag. To read more about magnetic (capacitve) coupling, read our article "Operating Principles: Coupling".

Passive RFID tags are available in the three most common Passive RFID frequency ranges - LF, HF, and UHF and are offered in two basic forms - inlays/labels and hard tags which have a protective casing. See below for some examples of different Passive RFID tags in the two available form factors.

Passive LF RFID Tags can be circular inlays with a copper coil, as shown above, but they are typically in a keyfob or glass (animal tracking) embeddable capsule shown below. 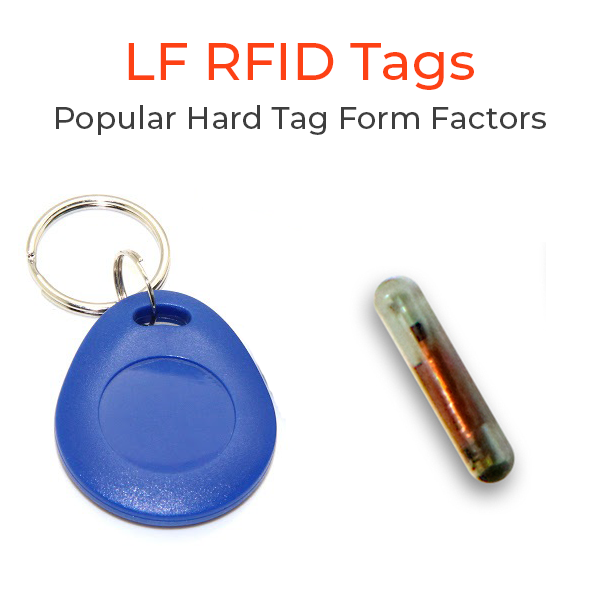 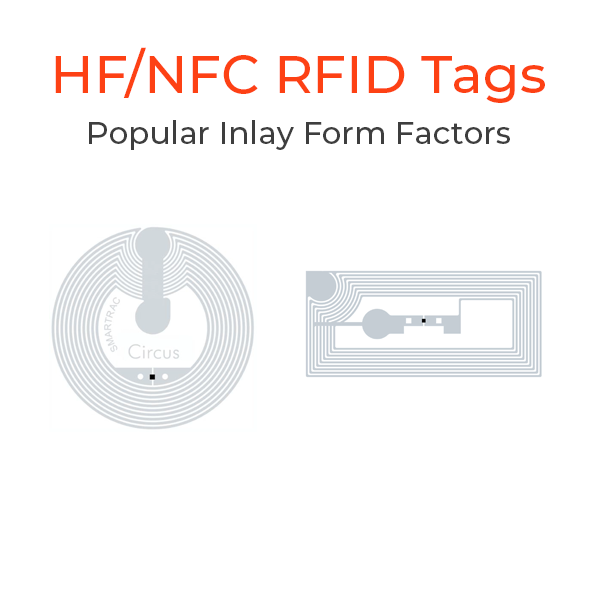 Passive HF/NFC RFID Tags are popular in both inlay and hard tag format. In inlay format they can either be square or circular with a metal coil, as shown above. In hard tag format, they are typically available in keyfob, plastic card, and plastic tag (miscellaneous) forms, as shown below. 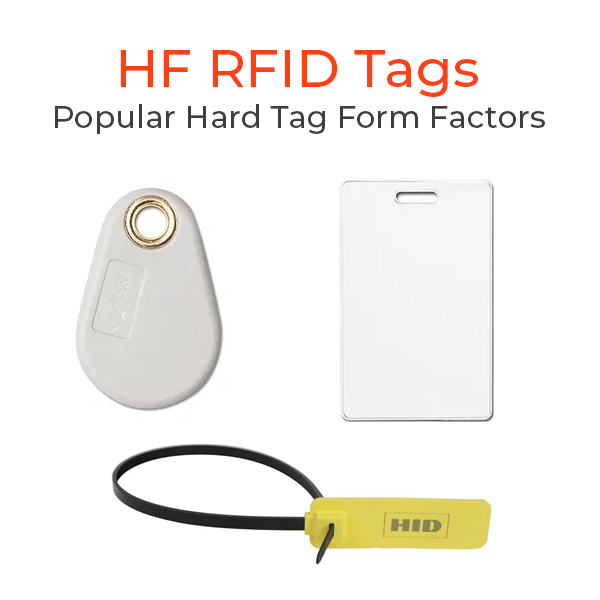 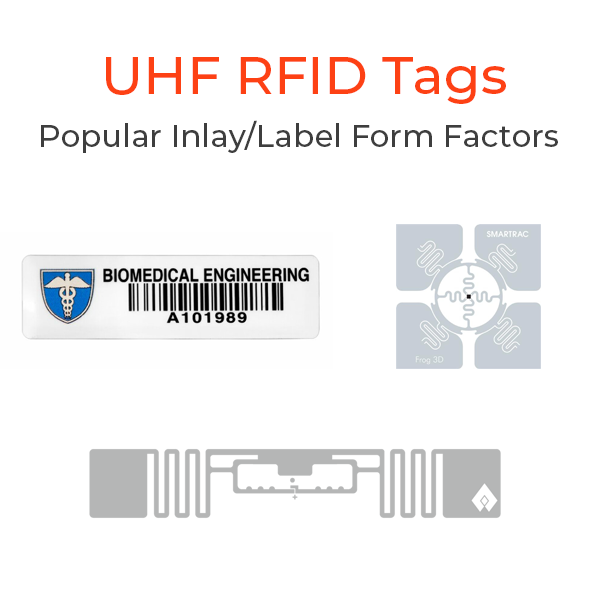 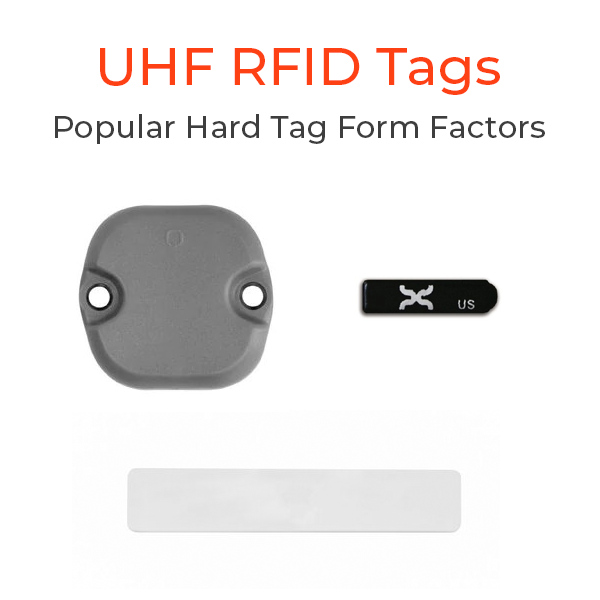 Passive tags have the ability to be made into inlays and labels, which are almost paper-thin, solely because they do not contain a battery. All Passive RFID tags can be activated by simply reading the RFID tag with a compatible RFID reader.

For more information about Passive RFID, checkout our popular article - Passive vs Active RFID or contact us!