Choosing a passive UHF RFID antenna can be a confusing task to those who are new to RFID. Passive RFID antennas typically look physically similar, so it is primarily their technical specifications that set them apart from each other.  When selecting an RFID antenna, the three most important specifications to consider are frequency range, gain/beamwidth, and polarization. We will discuss these factors below to help you better understand UHF RFID passive antennas.

When choosing an RFID antenna, be sure to select the frequency range that is right for your region. For example, an antenna tuned to the 865-868 MHz range and used in the United States would violate the regulations that govern the use of RFID equipment in the United States.

Gain and beamwidth are grouped together because they are both electrical components of an antenna and are distinctly related. The higher the gain, the narrower (or smaller) the beamwidth. Higher gain creates a narrower area of coverage, but the beam will travel a longer distance. Beamwidth and gain are analogous to the beam of a flashlight. Check out the diagram below to see how differences in gain can drastically affect the antenna's beamwidth. 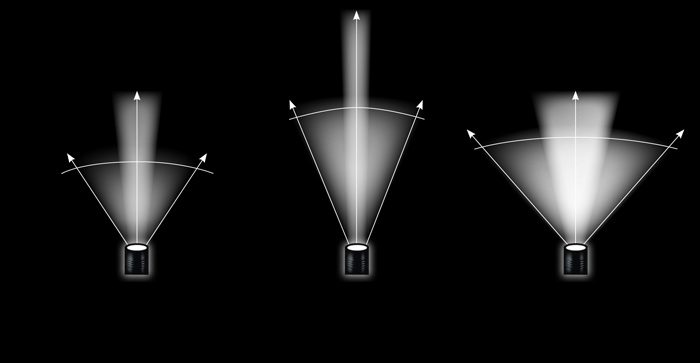 Beamwidth is determined by gain - the higher the gain, the more focused the beam.

The ideal beamwidth and gain will depend on your specific application. If you have many tags a short distance away, then you most likely don’t need a high gain antenna; it would be more advantageous to use a wide beamwidth antenna with relatively low gain as represented by the third image above.

When you have a setup with two separate RFID readers where antennas are facing each other, it's important to know if you have LHCP or RHCP antennas. When antennas face each other and emit waves in the same direction, null zones may occur where the waves overlap. Of note, in a single reader system, this issue won’t occur because the RFID reader only activates one antenna at a time. However, in a system where two antennas face each other and each is connected to a different reader, a combination of LHCP and RHCP creates a more effective read zone than if you use two LHCP or two RHCP antennas.

To read more about RFID Antennas, click on the links below!