#9 Tactics for Choosing an RFID Antenna

In short,  RFID Antennas take energy from an RFID reader and transmit it in the form of RF waves to RFID tags in the vicinity. If  RFID Readers are the “brains” of an RFID system, RFID antennas are the arms because they actually transmit RF waves to the tags.

In addition to transmitting, antennas also receive the information sent from the tags so the reader can decode it. While antennas are usually described as “dumb devices” in an RFID system, there are many different types, each with distinguishing characteristics, which makes selecting the right antenna extremely important. 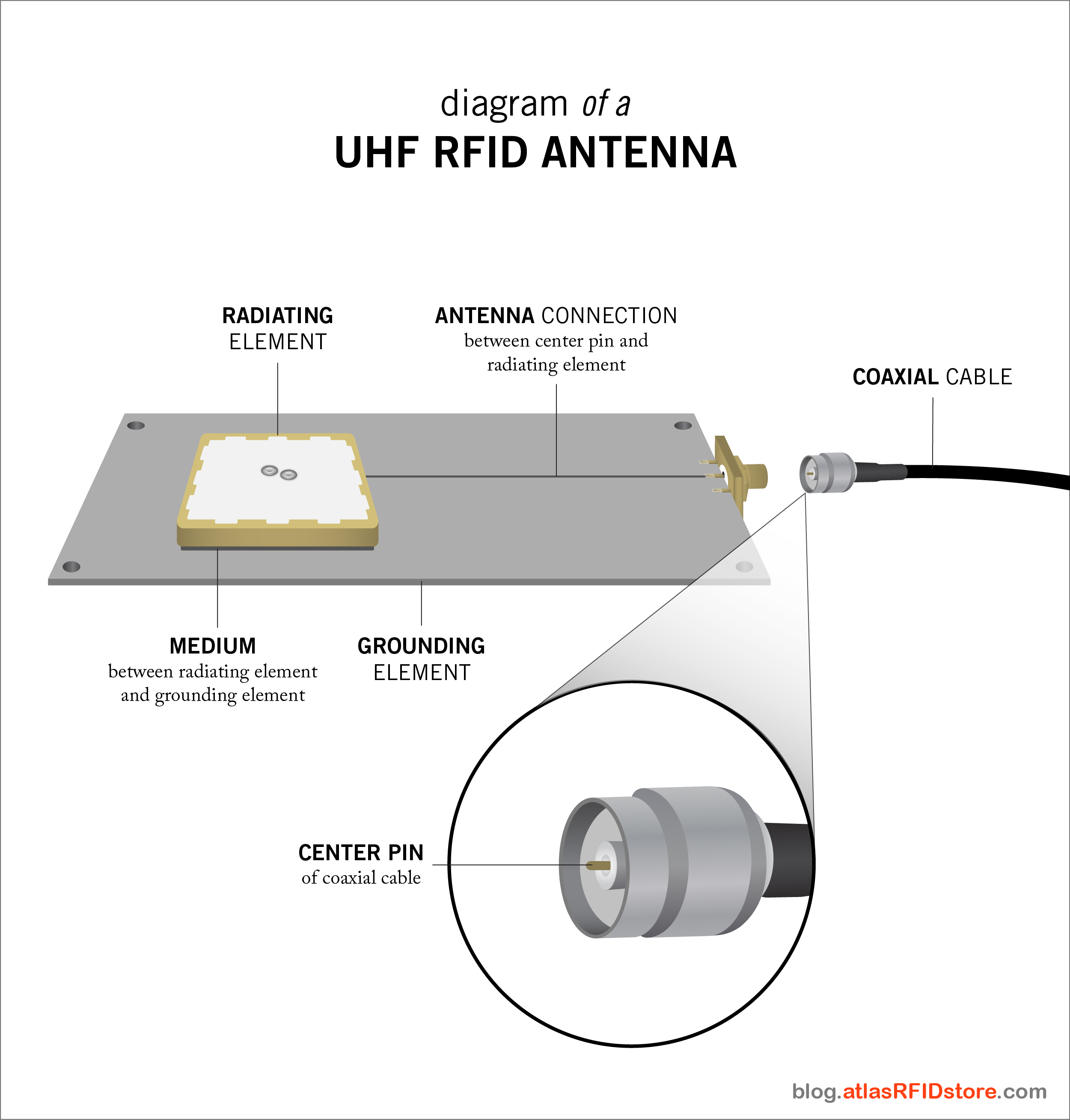 Before selecting an RFID antenna for a specific application, consider the information below about antenna types and options in order to make the right choice.

RFID Antennas range in size from smaller than a standard cell phone, to as large as a TV. The difference in size is usually indicative of the read range – the bigger the antenna, the higher the gain, the longer read range and vice versa. Some antennas, however, are exceptions to the rule because they were built for a specific application; one example is the large  Impinj Guardwall antenna. Built for tightly controlled read spaces, the Guardwall antenna only has a gain of 6 dBi because it is designed to be mounted across from another Guardwall to create a small, accurate read zone.

Size constraints may also factor into the decision making process because some applications do not allow for much available space in the area where the antenna will be placed. Certain environments, like retail stores, may not have the space for a bulky 15 x 15-inch antenna, nor will such an antenna fit in aesthetically. Small antennas are optimal for item level reading and writing as well as for applications that require smaller read zones like conveyor belt reading and personnel access control applications.

Key takeaway: The size of the antenna should depend on the space available in the application environment. Also remember, generally the smaller the antenna, the shorter the read range.

Because RFID applications can be implemented in almost any environment, each part of an RFID system must be reviewed or tested for ingress protection against water and dust. Just as most personal phones are not designed for use outside in a rain storm, most RFID technology is not either. All electronic devices are rated on ingress protection (IP) from dust and water, by the US IEC standard 60529 and the British standard EN 60529 ranging from IP 00 to IP 69.

For extreme temperature applications and/or low IP-rated equipment, solutions exist as a “work around” – for example,  weatherproof enclosures and temperature-controlled enclosures.

RFID antennas can either be  integrated within a reader as one device, or purchased separately as an external piece of hardware. Integrating a reader and antenna saves space and provides a more mobile system without worrying about lengthy cabling. Integrated reader antennas are also optimum for retail or desktop applications because they are usually compact, easy to use, and more visually appealing than two bulky external devices. External antennas, on the other hand, provide for many more options and flexibility within any given application. 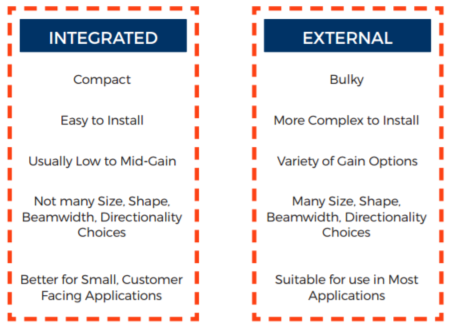 Key takeaway: Before purchasing a reader or antenna, decide if the application is small enough or customer facing where it would benefit from an integrated reader and antenna.

US, EU, or Global

Just like RFID readers and RFID tags, RFID antennas are designed for use within specific  frequency ranges. Without being tuned to a specific frequency range, antennas would not be able to transmit or receive information from either the reader or the tag. Most RFID antennas fall into one of the following operating regions:

The Global operating region is a good “catch all” for applications that run in multiple countries, or for applications that will be tested in both the US and Europe. Otherwise, it is better to choose an antenna with a narrower frequency range; doing so will result in better performance and, all things being equal, a longer read range. Of note, all RFID equipment working together within any given system must be tuned to the same frequency range in order to communicate successfully.

In order to decide which frequency or operating region is appropriate for an application, double check the frequency guide provided by  GS1 and ensure that all parts of the RFID system (tags, reader, and antenna) are all compliant within the country they are operating.

Key takeaway: If the system will be operating somewhere other than the US or Europe, double check the frequency guide for each country’s specific regulations. A global frequency range antenna is a good fall back if the exact regulations aren’t specified.

The way that  energy flows through an RFID system is key to understanding RFID antennas and the role they play.

Energy enters an RFID reader through a power cord or Ethernet connection and is directed through the RFID reader, out one of the antenna ports and into the center pin of an RFID cable. It is then sent through the length of the cable and, depending on length and insulation rating of the cable, a small amount of energy is lost due to cable loss. Energy then moves through the opposite center pin, through the center antenna connection located on the grounding plate and into the radiating element. It is then radiated out in the form of RF waves toward the RFID tag in range.

The size and area of the RF waves depend on the gain and beamwidth of the antenna along with the size of the elements inside the antenna like the grounding and radiating plates. Each antenna is made with different elements so each one will radiate the waves differently in some aspect or another.

The waves are received by the RFID tag’s antenna, sent to the integrated chip, and modulated with the pertinent information such as EPC or TID number. The tag then uses the leftover energy to backscatter RF waves back to the antenna. That information is then sent back through the antenna and cable and is decoded within the RFID reader.

Because RFID antennas radiate and receive RF waves, polarization is an important factor to consider when choosing an RFID antenna.  Polarization applies to waves and is basically the geometrical direction of the wave’s oscillation. RF waves generally oscillate in a single direction which can be described as linear, or in a rotating pattern which can be described as circular. Below is an illustration that shows the difference between radiating waves linearly and radiating waves circularly.

Two types of circularly polarized antennas exist and are differentiated by the way that they rotate: Right-Hand Circularly Polarized (RHCP) antennas rotate counter-clock wise, and Left-Hand Circularly Polarized (LHCP) antennas rotate clockwise. The choice between LHCP and RHCP only matters when there are two RFID systems with two separate RFID readers in a small area. If two RHCP antennas are facing each other in two separate systems, the waves could collide and cause a large null zone in the middle where no tags will be read. In this case, when these are facing, it would be important to choose one LHCP and one RHCP in order to create the best RF environment. 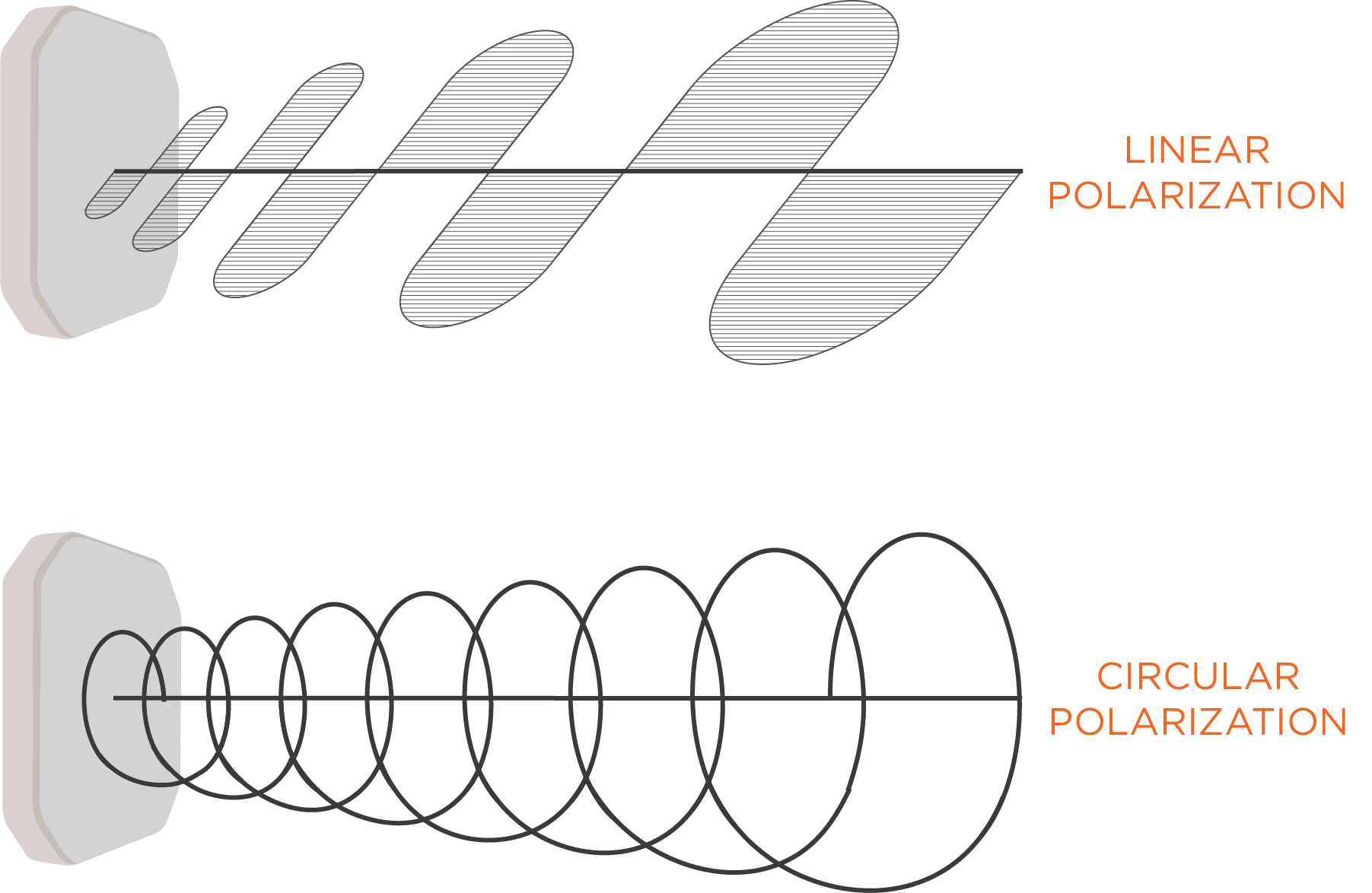 Far Field or Near Field

The most important characteristic of an RFID antenna from a user’s standpoint is usually the read range – i.e. how far the RF waves will radiate in a geometric field. Several factors determine the read range generated by an RFID antenna such as reader transmit power, amount of cable loss, coupling technique, antenna gain, and antenna beamwidth.

A key aspect of any RFID antenna is whether it is a  far-field or near-field antenna. The difference in the two is the way in which they communicate with an RFID tag.

Near-field RFID antennas typically use magnetic or inductive coupling to communicate with the tag when it is the near vicinity. Near-field antennas usually cannot read more than a foot away at the most because their magnetic field and the tag antenna’s magnetic field must be close enough to send and receive information.

Far-field antennas use backscatter to communicate. Backscatter is a communication method in which the antenna sends energy to the tag, which powers the integrated circuit (IC). The IC then modulates the information and sends it back using the remaining energy. Far-field antennas can communicate with passive RFID tags up to 30 feet or more in an optimal environment.

Long read range is not always optimal. In an application with limited space, a greater read range could cause problems due to reading too many tags at once (i.e. “stray” tag reads), instead of one specific tag or group of tags.

Antenna gain is expressed in decibels (dB) and is a logarithmic unit of measurement of the ratio of two powers. Gain can be expressed as a few different units of measure such as dB, dBi, dBd, dBm, or dBW which makes it a little more complicated to define. The difference in the unit conveyed (dB, dBi, etc.) explains which two ratios are being measured. Antenna gains cannot be adequately compared in two different units of measure.

dB–The antenna’s power output measured against the power input into the antenna.

dBi–Antenna gain expressed in dBi and is basically the measurement of the amount of power required to produce a certain field of electromagnetic waves in comparison to a “perfect” (no loss, isotropic) antenna’s ability to produce the same field. (dBi = dBd + 2.15)

dBd–The antenna’s power output measured against the gain of a halfwave dipole antenna.

Key takeaway: Decide how much read range is required in order to fulfill your application’s needs. Factor in antenna gain accordingly, and be sure to compare antenna gains with like units of measure.

Beamwidth is very closely related to gain and is exactly what the name implies – the width of the beam or RF field. Two fields exist - the azimuth and elevation fields - and they each have a beamwidth which is crucial to understanding where the RF waves will be directed. Linearly polarized antennas have a relatively small beamwidth in one field, and, depending on the gain, between 30 degrees and 360 degree beamwidth in the other. Most linear antennas’ specifications note the elevation and azimuth beamwidths as the same degree due to the fact that the antenna can be physically turned 90 degrees to show the opposite beamwidth.

Generally speaking, the higher the gain, the smaller the beamwidth. most users have to decide what is more important for their application, a greater length of read with a small width, or a shorter read length and wider RF field. Some examples are included below. 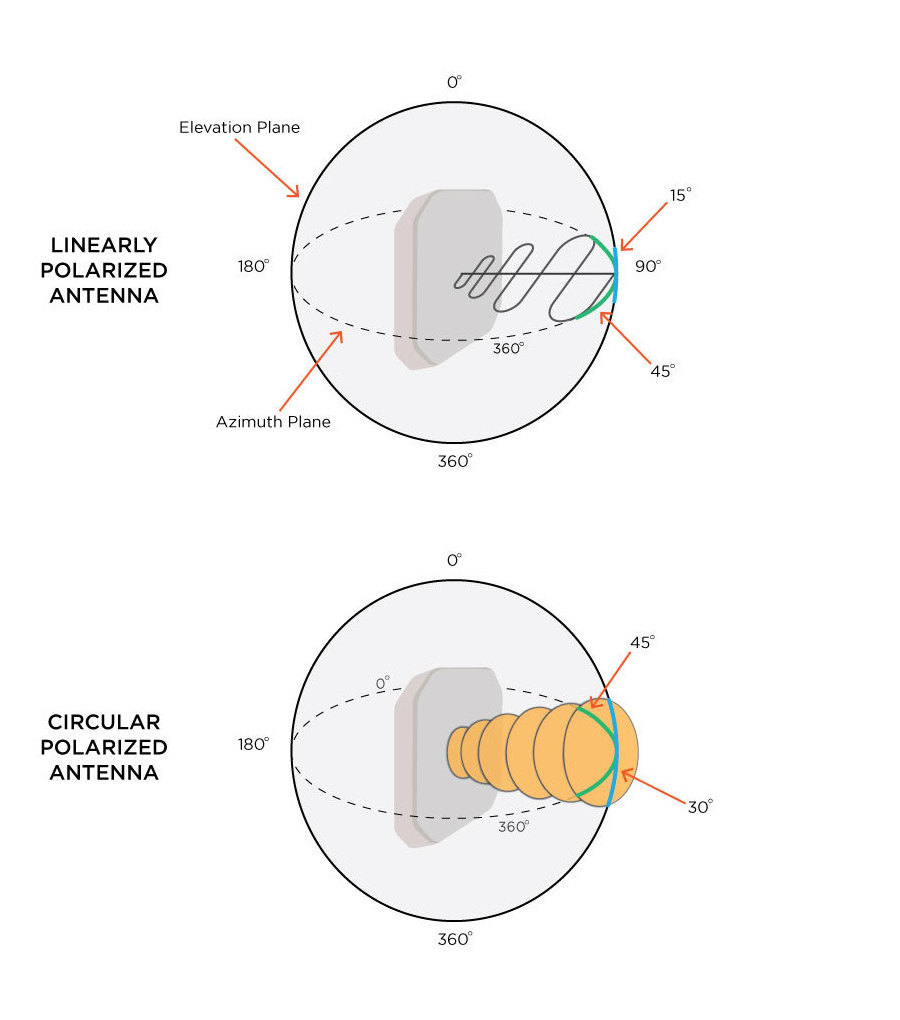 Omni-directional antennas provide a wide range of coverage in one plane. Instead of producing a cone-like beam of coverage like directional antennas, omni-directional antennas usually cover one entire plane. Their 3D radiation patterns look similar to doughnuts because they typically have coverage of 360 degrees in one plane and around 20 to 65 degrees in the opposite field. These antennas are made for environments that will see tagged items all at the same height, but may pass the antenna at different angles. Unfortunately, because these antennas have to cover such a large plane, their gain is usually low to lower mid-range.

After reading the information above, choose the antenna characteristics that best suit your application’s needs. Circling these options will narrow down the possible antenna choices and, ultimately, help determine which antennas should well work for you. 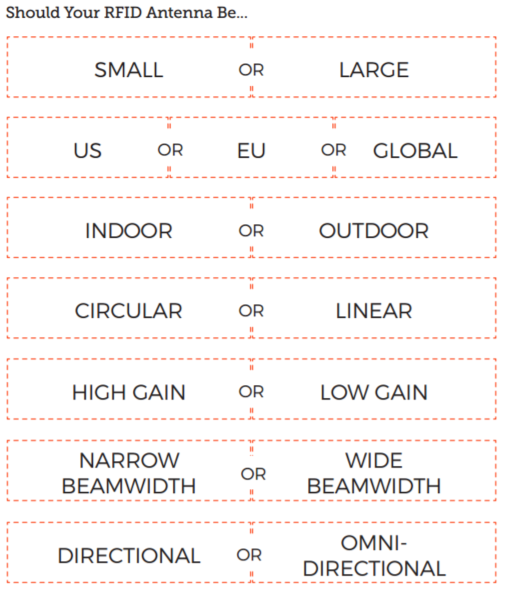 If you have any additional questions about if RFID is right for your application, or about RFID antennas, don't hesitate to  contact us.