RF interference is typically caused by  environmental problems like  metal and water. However, Tag Shadowing can be another culprit that is often overlooked. Tag Shadowing is an RFID application setup concern that can cause less than ideal tag read/rates and reduce tag read range unless properly mitigated. Below, we will explain what tag shadowing is, when it happens, and how to mitigate it to deploy a more successful RFID solution.

What is Tag Shadowing?

Tag Shadowing happens when one  RFID tag is positioned directly in front of another RFID tag, in close proximity. When tag shadowing happens, the front tag, Tag A, receives the RF energy from the reader, while Tag B is completely overshadowed by Tag A and therefore most likely doesn't receive enough RF energy to turn on, modulate the energy, and send a response back.

Tag Shadowing is always viewed in relation to the  RFID system's antenna, meaning that two tags could be one behind the other when viewed horizontally, but because the RFID reader reads them both from a different position, there is less of a chance of tag shadowing. See the Graphics below. 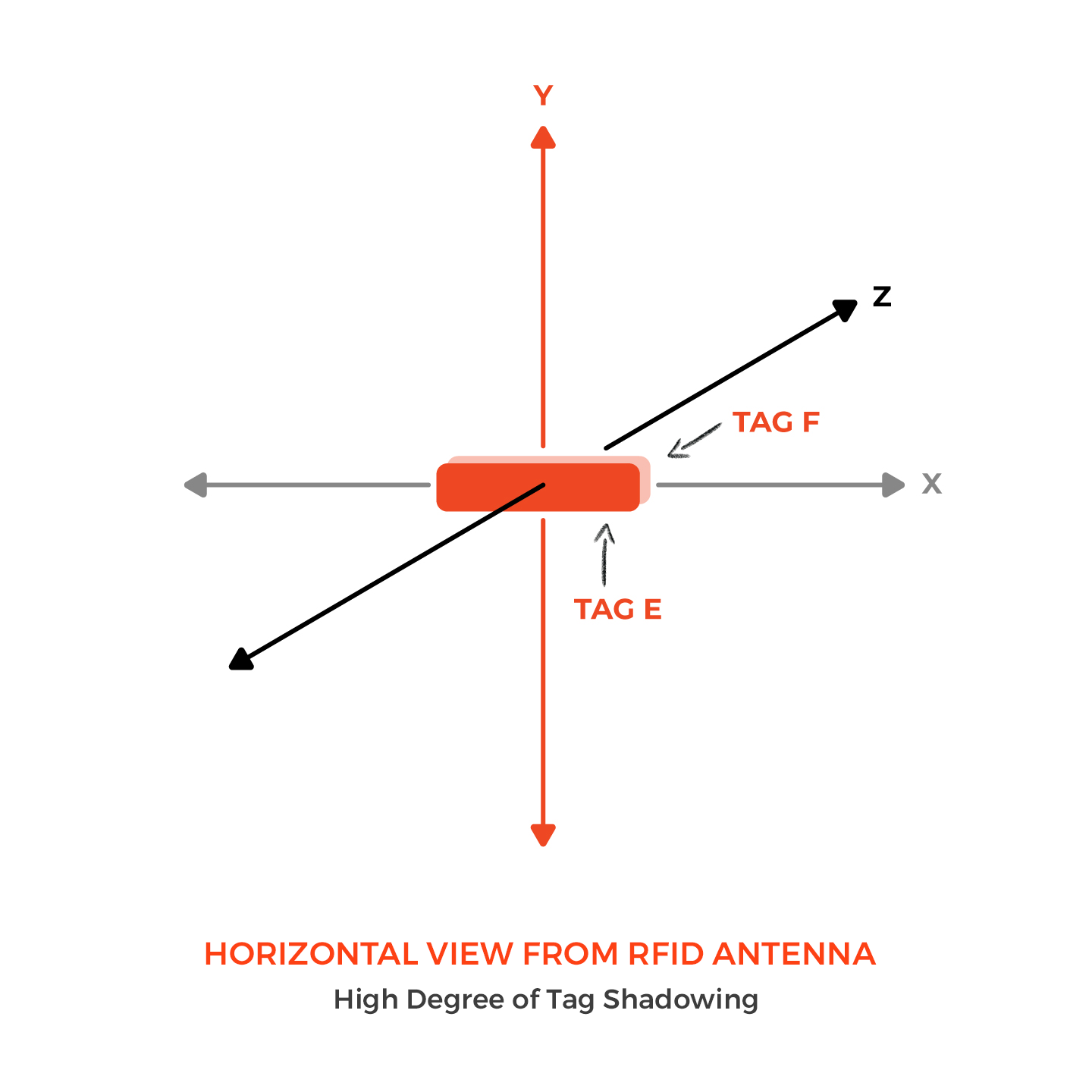 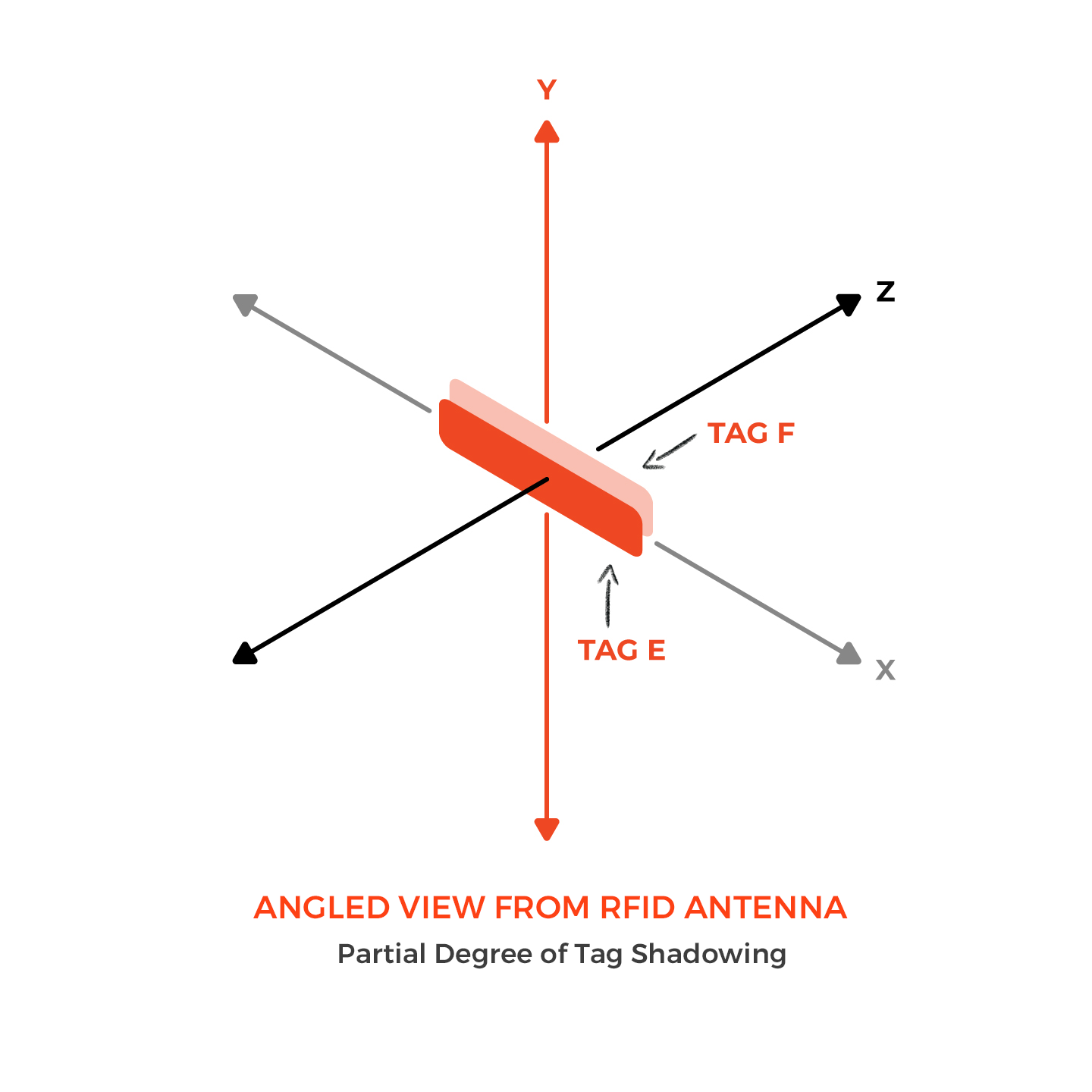 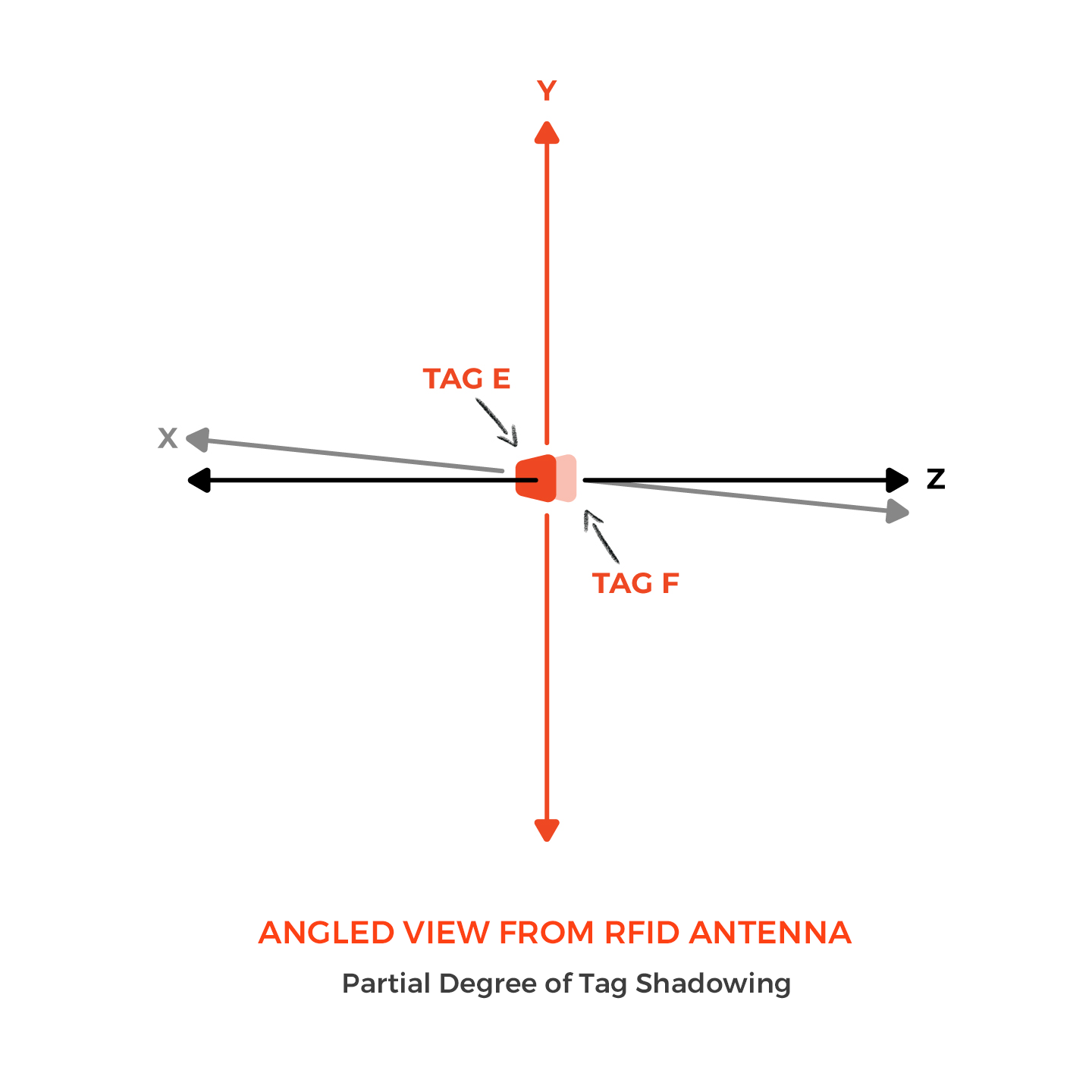 Tag Shadowing occurs most often in Dense Tagging Environments - which means in environments that are closely packed with a large number of RFID tags. To read about Dense RF Environments, checkout the two links below.

What is Frequency Hopping?

Most often, RFID Tag Shadowing is experienced in small item inventory applications because the items can be closely packed together, such as:

How do You Mitigate RFID Tag Shadowing?

There are a few different ways to mitigate Tag Shadowing - which one you choose typically depends solely on your application. Below is an example of a pallet and RFID system setup, and below that is how the setup and placement of the tags is causing tag shadowing on a pallet. 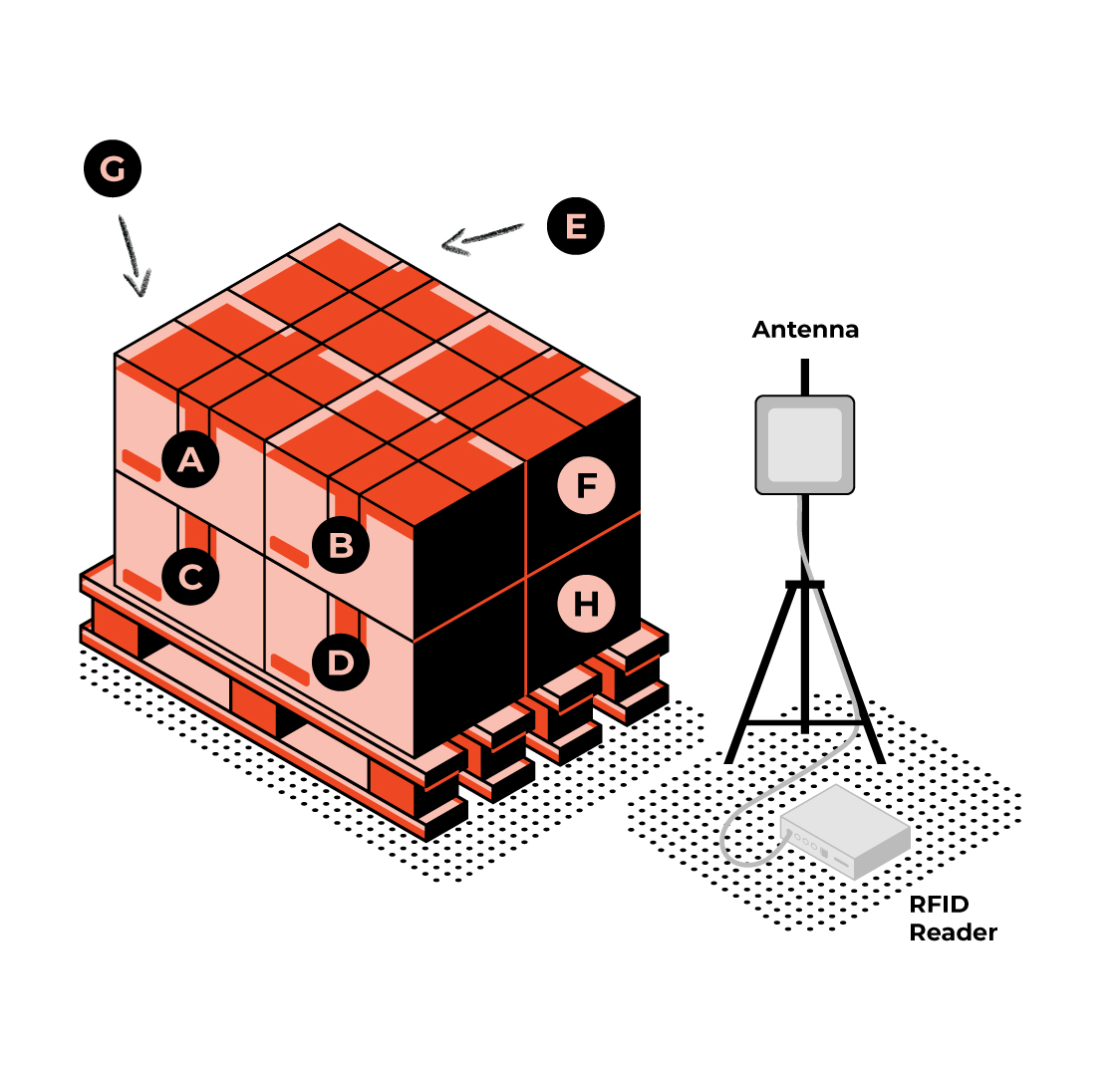 If Boxes A & B are taken away, you can see that Boxes E & F are tagged in the same exact spot. 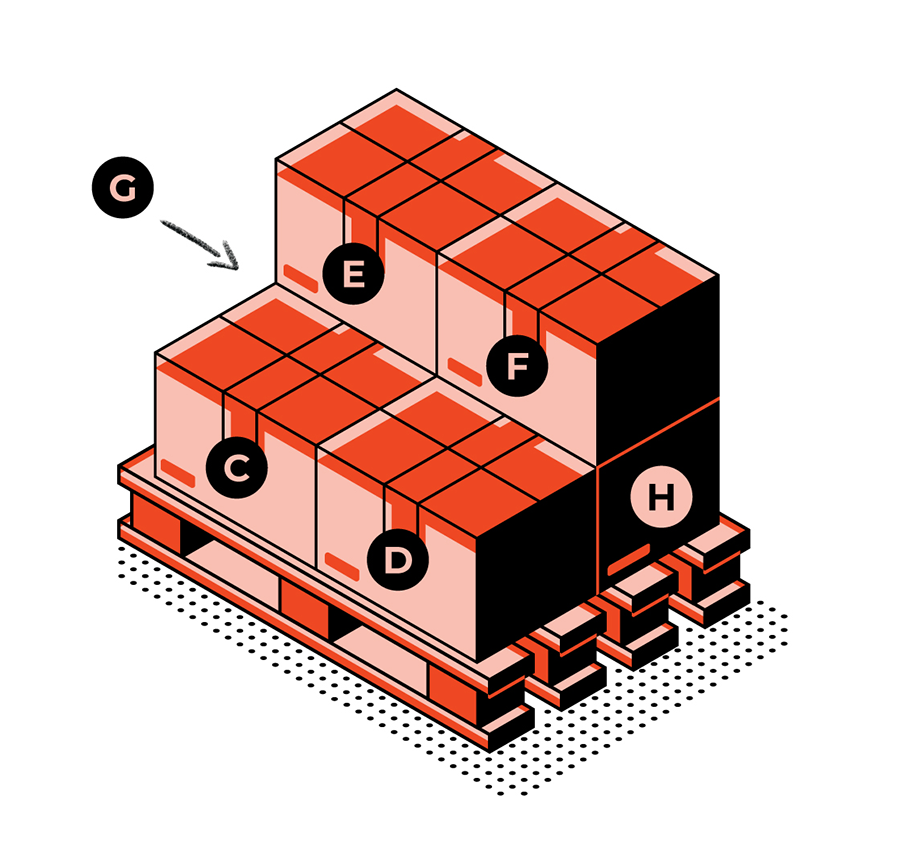 Boxes E, F, G, & H were tagged on the same side to correspond with the RFID reader/antenna's position on that side.

Unfortunately, Boxes E, F, G, & H are most likely not able to be read because of Tag Shadowing.

One way to fix or prevent tag shadowing is simply to change the tag or antenna’s  orientation. Below are a few graphics showing different ways to change a tagged item and/or an RFID antenna's orientation to receive better reads for a pallet of tagged boxes.

Place all tags facing outward - to the left or right, front or back, or even have the top row of tagged items with the tag facing up if an antenna can be mounted from above, or head on. 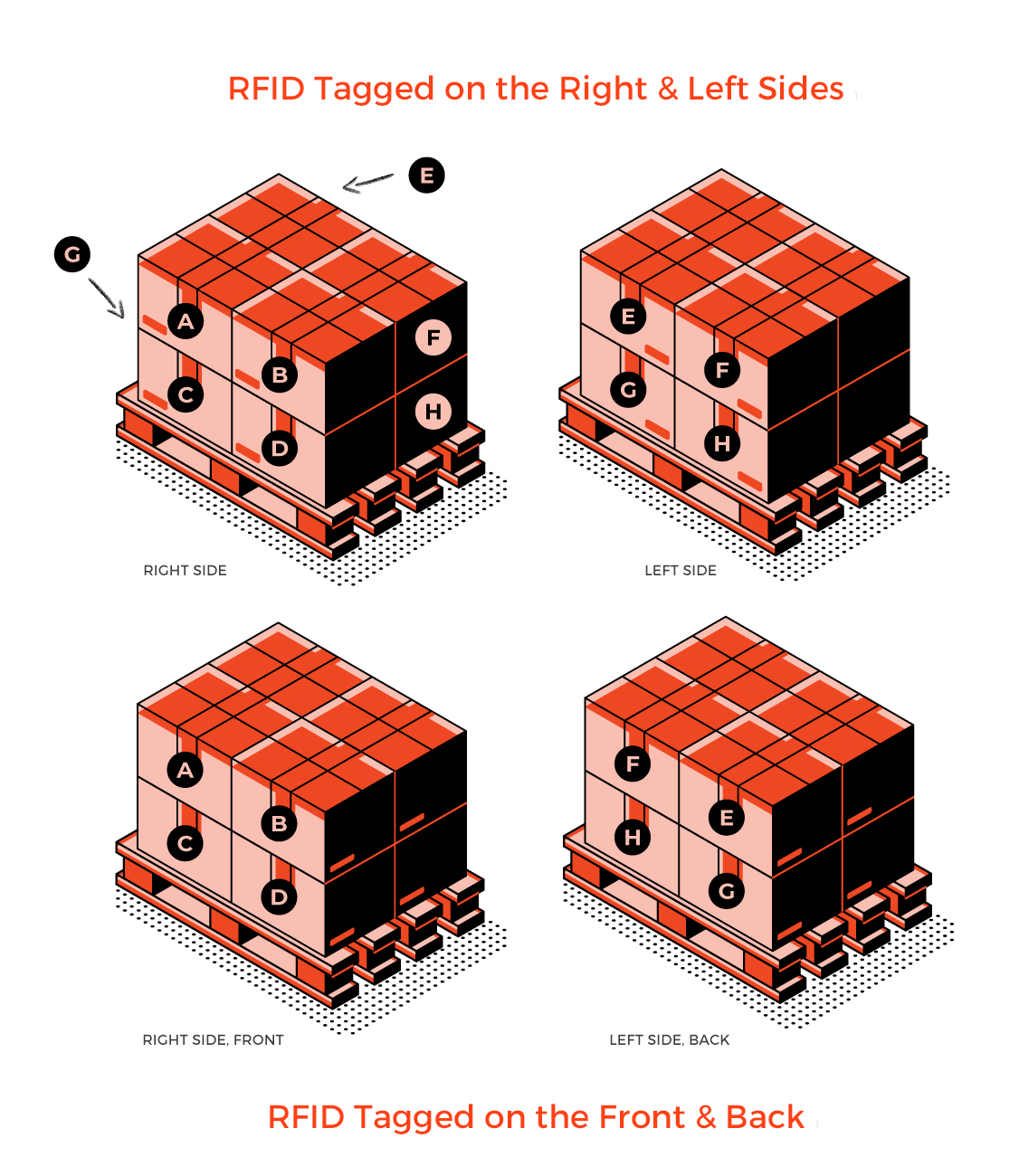 Instead of the reader/antenna system or the tagged items in a fixed position, tag shadowing can be mitigated if there is movement, movement allows the RF energy to originate and propagate from a variety of different angles. Movement could be incorporated a few different ways:

Move the tagged items through a read area in order to take advantage of different read angles.

Allow the pallet wrapping station to turn the pallet to take advantage of different read angles.

If the RFID tags are back-to-back, for instance, like files in an  RFID file tracking application, tag shadowing can be mitigated by staggering each tag’s placement on the items. Instead of placing each tag in the same exact location on each item, stagger each tag’s position slightly in relation to the position of the RFID tags in front and behind the item - see image below. 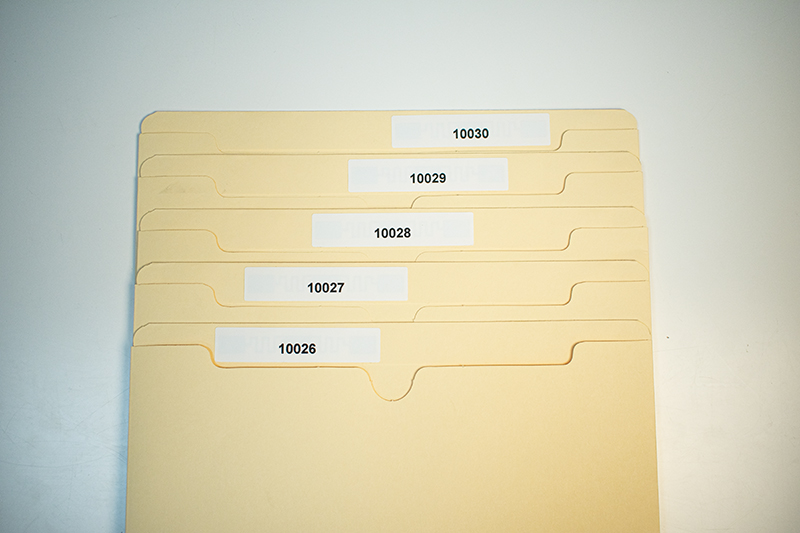 Have you had any issues with RFID tag shadowing that you have resolved? Tell us about it in the comments below - we would love to feature your first-hand information! For more information about all things RFID - comment below or contact us.

For more information about mitigating potential problems in an RFID deployment - check the articles and ebook below.