If you currently have an RFID system, or are thinking about purchasing one, there are a few terms that should be in the back of your mind when you start setting up your system.

The RF energy that your reader generates is sent out in electromagnetic (EM) waves and like any wave, their propagation is impacted greatly by their surroundings. Some travel in direct lines, and some move out at different angles from the bore sight (or center of the antenna). In order to better anticipate the paths RF waves travel in your system, you need to have a deeper understanding of EM waves.

EM waves, just like light waves, water waves, and sound waves react very differently in diverse settings. Below are a few reactions that these waves have with specific objects and materials which could drastically impact the performance of your RFID system.

Like all waves, EM waves reflect off of specific materials at the same angle (angle of reflection) that they approached the material (angle of incidence). EM waves are reflected from metallic surfaces, as well as dielectric surfaces such as dirt, wood, ice, asphalt, cardboard, paper, glass and concrete. Wet surfaces also provide better reflection such as pools, oceans, lakes, or even pitchers of water. Reflection can be avoided by blocking any metallic or dielectric surfaces, or adjusting your read range sensitivity on your reader.

Not as big of a concern as reflection in RFID systems, refraction is when the EM waves pass through a specific material at an angle and changes angles when it passes through. A typical example of refraction is when light waves pass through water and propagates at a different angle through the water. Water and other dielectric materials between the tag and antenna can refract the EM wave.

When RF waves seem to bend around objects instead of passing through them, it is called diffraction. Metal poles, corners of buildings, and other corners of metallic objects are where this is seen the most.

When an EM wave is absorbed by the object that it is sent toward it is called absorption. Specialized absorbent material like carbon loaded foam for example work well to absorb EM waves. Water and most materials absorb RF waves to an extent as well as refracting, reflecting or diffracting.

The definition of multipath is “when two or more favorable radio paths exist between the reader antenna and the tag.” When the reader sends a signal to the antenna to ‘ping the tag’ the antenna doesn’t just send one beam of RF waves straight forward. The reader antenna sends waves on several different paths in order to pick up the tag’s signal. This is where reflection, refraction diffraction and absorption come into play. 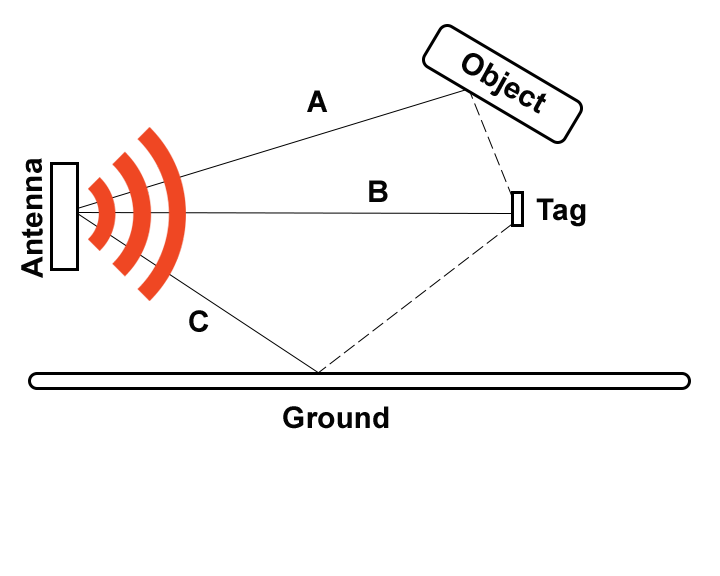 Each path besides the direct path is at a small angle from the center and has a high probability of experiencing reflection, refraction, diffraction or absorption depending on the materials or objects in the vicinity. That poses a problem when you have more than one tag in the read field, and you only want to read a specific subset of tags. One way to mitigate this problem would be creating a tunnel type of enclosure with RF shielding materials. For example, if you were using a conveyor belt RFID system to read tagged boxes on the warehouse floor, but only want to read the specific set of tags coming through the conveyor belt, installing the reader antennas in a contained tunnel will create a boundary from the effects of multipath.

Another problem area with multipath is if the direct RF wave intersects with another RF wave with a different phase, it will create a null spot in your read field. Null spots can occur multiple times in your read zone. In a null spot, your RFID tag will not be read by the antenna because the out of phase waves will cancel each other out.

The phase of a wave is defined as the distance between the first zero-crossing and the point in space defined as the origin. That basically states that if the waves have the same frequency and do not intersect each other, the waves are ‘in phase’. If you have two waves that either have two different frequencies or do intersect each other, these waves are called ‘out of phase’. See the drawing below for more information.

The waves above are ‘in phase’ waves.

The waves above are ‘out of phase’ waves.

In-phase waves will intersect in the same phase, thus creating constructive interference. You can see below that constructive interference strengthens the wavelength making it possible to read well outside the normal read range of that antenna. An example of that would be if your antenna typically reads around 6 feet, in one area where two RF waves come together at the same phase, your antenna would be able to read a few feet more.

Destructive interference of ‘out of phase’ waves, causing a null area in the read zone.

Determining the exact area that is a null zone or an extended read zone is not a trivial process. In order to determine these areas, you would have to move the tag around on the x, y, and z axis.

All of the information about EM waves and multipath above can help you to anticipate how to get the most out of your RFID system. If you effectively design the area surrounding your system, you can avoid the different effects of multipath.

To read more about RFID concepts, check out the links below!