Middleware is a layer of software created to connect other components together – e.g. hardware components, software programs, enterprise applications, databases, etc. Middleware gives software developers the ability to communicate and manage data throughout an entire system rather than on each individual application. RFID middleware goes beyond simply connecting devices; rather, it allows users to collect, manipulate, and disseminate data with ease. 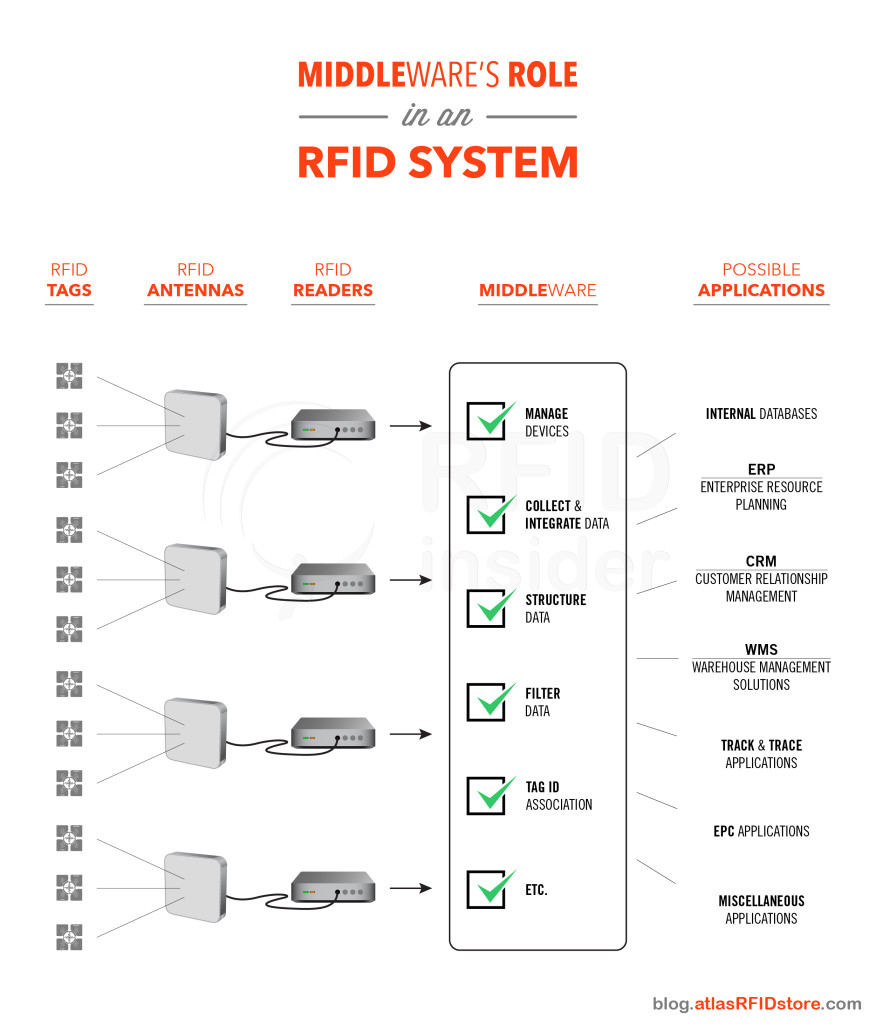 1. Manage Devices – Middleware is able to control the networking and settings of RFID readers (and other similar devices) and provides a simple way to update any changes that need to be made, even if there are varying types and brands of RFID readers on the network. For example, middleware may include a feature like the ability to monitor the performance level of the readers, which allows users to better predict potential problems and ensures all readers are running at peak performance.

2. Collect and Integrate Data – Middleware acts as a bridge, connecting different systems together and enabling the efficient transport of data. When tags are read by an RFID system, the data collected can be sent directly to the middleware in order to process it and then send it where it needs to go (whether that is a warehouse management system, internal database, or some other destination).

3. Structure Data – Middleware provides users the ability to understand what data they are collecting from each device (RFID reader, barcode scanners, etc.) and map out the structure of where that data goes and when. EPCglobal® released a software specification in order to streamline and help users create a more detailed and useful structure with middleware for their data. The specification, called Application Level Events or (ALE), is designed to help middleware filter and sort through raw data in order to provide users with relevant information based on “events” that occur. (Events are predetermined by the user as items that are significant for the business.)

For example, a shipping company wants to know the exact time pallets arrive at the dock door. The first time a tagged pallet is read at the dock door would be an event, and the relevant data is sent to an application. The RFID tags on the pallet are likely read hundreds to thousands of times afterwards, but all of those tag reads can be filtered out by the middleware and not sent or processed by any system.

The ALE specification gives users the freedom to input information such as from which locations to read, how to filter the data, and how to the group the results. Users can then subscribe applications to the structured events allowing the applications to receive reports or messages whenever an event occurs. Applications can subscribe to any number of events and any type of events without affecting one another.

4. Filter Data –RFID middleware can be used to filter out the RFID tag reads deemed most important and remove redundant or repetitive reads. In some applications, RFID tagged items are read over and over again by the same RFID reader depending on how long the equipment is stagnant in the read field. RFID Middleware can assist by filtering out hundreds of identical reads so that the user only receives the data important to the application, such as a timestamp of when the equipment was placed inside of and removed from the read field. Filtering out excess data can be extremely helpful for users because massive amounts of tag data can slow down networks and fill up databases quickly.

5. Tag ID Association - In a system with hundreds to thousands of RFID tags, RFID middleware can keep track of and allocate tag ID numbers. In a situation where a company is writing hundreds of RFID tags to apply to pallets or cartons of many different types of items, middleware can keep track of which tag ID numbers have been used and assign tags IDs relevant to the item type, date, etc. Middleware can then record the allocation of that number, that the tag was applied properly, and, later, the first read of the new tag.

6. Miscellaneous – Because the potential uses for middleware are nearly endless, the same can be said of the potential functionality. Additional integrations, languages, or formats are just a few examples.

Organizations implementing RFID systems without a commercial off-the-shelf (COTS) solution are ideal candidates for RFID middleware because they can use it to integrate other applications and databases and to eliminate manual processes. When a company is looking for middleware to support its system, it may be beneficial to analyze what is commercially available on the market. Most importantly, the organization should define exactly what it wants to achieve as well as any requirements before starting the search process for COTS or custom middleware.

To learn more about RFID, check out the links below!