An Intro to RFID Readers: Basic Options and Features 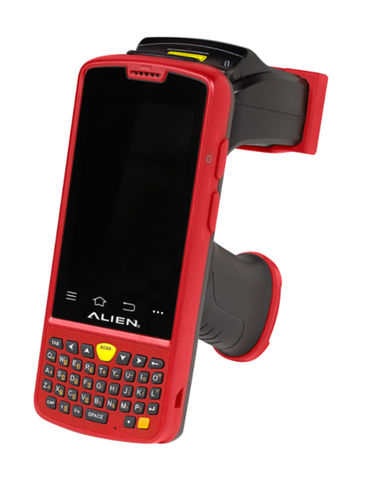 Every year, new  RFID readers hit the market with improved usability and features, so it is important to know the pros and cons of each reader as well as any additional features that could make an impact on an RFID application. Before diving into the features available on RFID readers, first it is necessary to understand the two major classes of readers recognized in the industry.

Mobile Readers – The first subset of mobile readers can be classified as mobile computers, which also have an integrated antenna. No additional antenna ports are available on these readers, but there are plenty of other features, like onboard processing, that enable these readers to run various programs while maintaining high read rates. Sleds, a second subset of mobile readers, are small RFID readers that connect to a smart device through Bluetooth or an auxiliary port and use a downloaded or custom-developed mobile application in order to function.

Most RFID readers are made with certain specifications, options, and features that make them unique in comparison to other readers on the market. Below is an outline of general reader features followed by a break out of specific options and some information about each one. 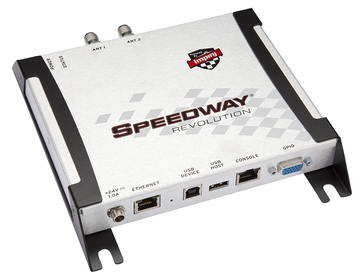 How the reader is powered is one of the first things to note when purchasing an RFID reader. In certain applications, such as mobile, manufacturing, or warehouse-based, outlets are limited or unavailable, which narrows down the power options. Four options are available when deciding how to power an RFID reader.

Power Adapter – The most common way to power an RFID reader is plugging it into an outlet via a power adapter. Before using this method, ensure that an outlet is in close proximity to where the reader will be installed.

PoE – Another popular way to power an RFID reader is PoE, or Power over Ethernet. PoE uses an Ethernet cable to both power the reader and send/receive data. After setting up a reader via PoE, cabling can be run up to 100 feet and still reliably provide power to the reader. The advantage of using PoE (vs. a power adapter) is the elimination of the need to run AC power to a reader’s location, which may add up to considerable savings in moderate to large deployments.

Battery – Generally specific to mobile readers, batteries provide power while allowing the reader to be cordless and mobile. Batteries are very convenient but they still must be charged, usually after several hours of continuous use. A best practice is to have spare batteries along with a charging station that can charge multiple batteries at once.

In-Vehicle – Applications that require an RFID reader within a vehicle (e.g. truck, forklift, etc.) should consider a reader that has been developed specifically for use in vehicles. Powering an RFID reader through a vehicle is a great solution for reading RFID tags while driving around large areas like laydown yards or for reading pallets as a forklift picks them up. Not many readers on the market have been designed specifically for such use, but the ones that have are ruggedized and contain loose wires that can be connected directly to the vehicle’s wiring. 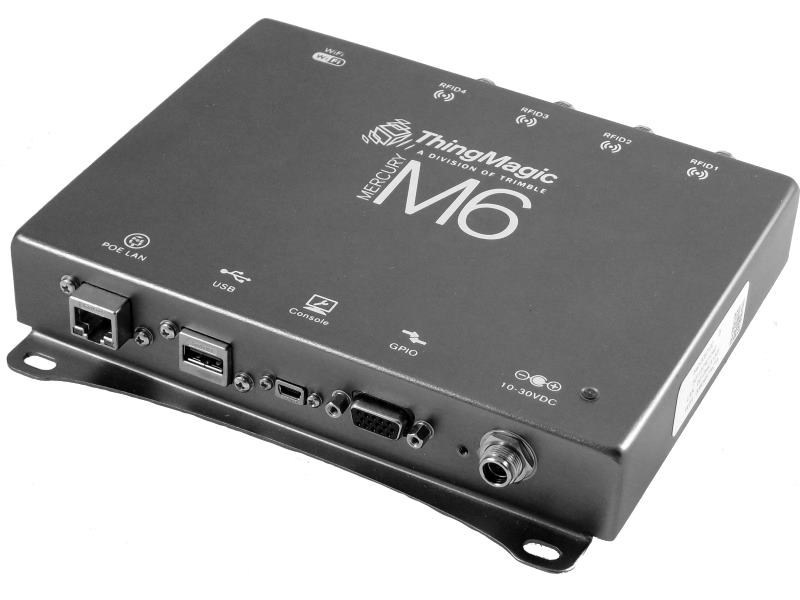 RFID readers connect to host computers or networks and communicate data in a variety of ways. Connecting to a network allows readers more flexibility than being connected directly to a computer; instead, they are able to communicate with other programs and readers to create a connected and resolute system.

Wi-Fi – Connecting to a network or a host computer can be done via Wi-Fi for applications in a setting with a strong Wi-Fi connection. Wi-Fi connectivity provides a cordless, flexible option for RFID solutions. Wi-Fi and LAN ports are generally the only options if the application needs to be connected to a network. An additional advantage to an RFID reader on a network is the ability to connect a  printer or other smart device to the reader.

Bluetooth – Bluetooth allows the reader to connect to a host computer while remaining wireless. Bluetooth options are generally available on handhelds - especially sleds - for connecting to smart devices like phones and tablets.

Serial – Serial ports use either a 9 pin serial or USB cable to connect directly to a host computer. A serial connection is optimal for simple applications with one reader and host computer and no need for additional network capabilities. 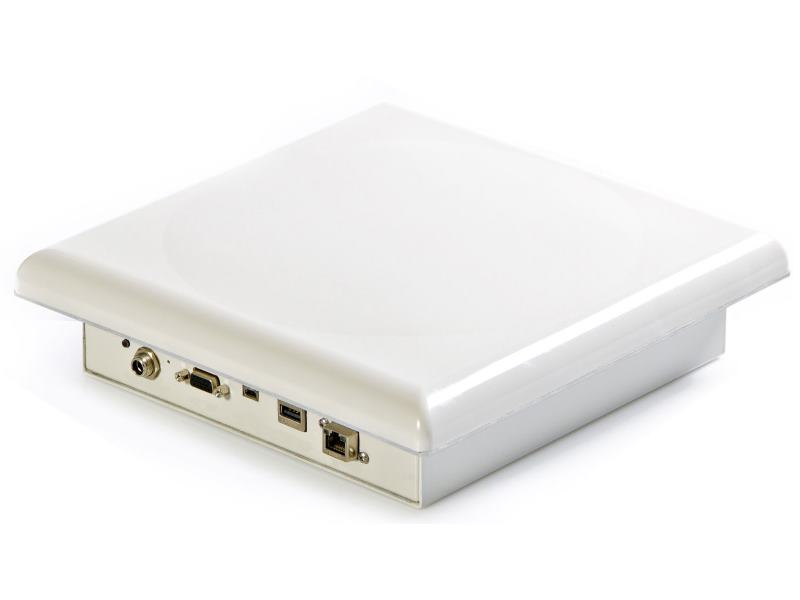 When choosing a reader for an application, the user should always check the amount of available antenna ports. Typically, readers are available with two-ports, four-ports, and eight-ports (without any additional devices, such as  multiplexers). Antenna hubs, or multiplexers, are available that can connect up to 32 antennas to a single reader. When determining the amount of antenna ports (or antennas) that an application requires, first decide upon the number of read zones required, and, within each read zone, determine how much coverage is needed in order to achieve the  desired read rates.

Fixed Readers – Fixed readers usually come with two-ports, four-ports, or eight-ports, depending on the reader. These readers can be set up to cover one read zone or a few different ones, depending on the speed and amount of tagged items.

Integrated Readers – Integrated readers are ideal for applications with a small read zone and are usually more aesthetically pleasing so they can be used in applications like retail or file tracking. These readers usually have one integrated antenna and one open antenna port for connecting an additional antenna if needed.

Mobile/Handheld Readers – Typical mobile/handheld readers have one integrated antenna and no additional antenna ports. Examples: Zebra MC3190-Z, U Grok It Grokker, Invengo XC-1003 Multiplexers – Multiplexers, also called antenna hubs, can be used in conjunction with RFID readers to increase the amount of antennas able to connect to a single reader. With certain configurations, a single four-port fixed reader can connect to up to 32 antennas. Of note, most multiplexers are only designated for use with very specific RFID readers. 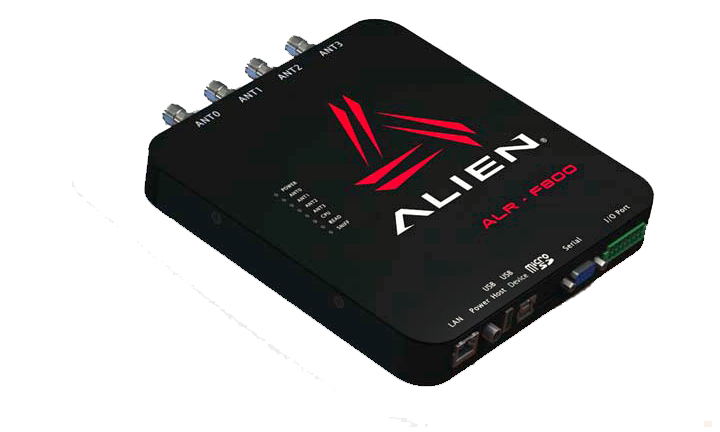 General Purpose Input/Output connections on RFID readers are used for optional devices like  light stacks and motion detectors. Generally, readers read and write tags, but with the addition of an  auxiliary device connected through a GPIO port, certain tag reads (or lack thereof) can be programmed to trigger an event. These events, like turning on a green light when a tag is read, provide audio or visual cues that can help an application run smoothly and effectively. When deciding to add an auxiliary device, it is important to understand the amount of voltage it will need in order to perform effectively. Some devices use much more voltage than the reader is able to supply; in those cases, a  GPIO box is required to provide the extra power to the auxiliary device.

Inputs – GPI devices or General Purpose Input devices are connected through the GPIO port and include items like motion detectors and  light-break sensors. GPI devices use electrical signals to communicate with the reader. If the device sends a signal to the reader, software commands the reader to perform a function specific to the application.

Outputs – GPO devices or General Purpose Output devices are connected through the GPIO port and include items like light stacks and  annunciators. For example, if a reader reads a certain tag, software can then tell the reader to send an electrical signal telling the auxiliary device to perform a specific function, such as turning on a light. 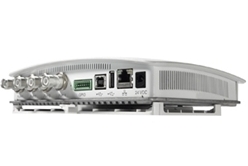 On some RFID readers, additional ports or utilities are added in order to provide new functionality that can either simplify or enhance the current system. Below are a few common examples of additional features on RFID readers and how they can be used.

HDMI – One of the newest features on RFID readers is the addition of an HDMI port. HDMI ports allow a display or monitor to be directly plugged into the reader.

USB – USB ports are multifunctional on RFID readers and their exact functionality is explained within each individual reader’s specifications. While the USB port may function differently on each reader, it can be used for data storage, data transfer, powering, or for additional ancillary capabilities such as adding a Wi-Fi dongle.

GPS – A mobile RFID reader with GPS capabilities is very useful in large deployments, especially those spanning hundreds of meters. GPS coordinates can be associated with the tag read, allowing users to note a defined location of the asset.

Camera – In some applications, especially in remote areas, it is convenient to have a camera outfitted in a mobile reader in order to document a tagged item’s status. This is especially helpful if the handheld also has GPS capabilities that may enable the tag read, photo, and GPS coordinates to be associated (geo-tagged) and sent back for analysis. Pictures of tags can also be stored for any needed inspection recording purposes.

Onboard processing is typically associated with mobile computing RFID readers, but is also available on many fixed readers. A reader with a processor can run applications on the reader instead of running them on a computer. This reduces the need for a host computer in networked applications. Readers with onboard processing typically have their memory capacity outlined in the specifications, which is important to note when developing an application. If the RFID reader does not have the memory capacity to handle all the added programs, SD card slots are featured on some readers for expansion purposes.

Applications can take up most of an RFID reader’s memory, but memory can also be used to store read data on the reader itself. The ability to store and buffer tag read data is a great benefit when a network connection is not available. By storing tag reads, the data can later be uploaded to a network or host computer when available.

An API, or Application Program Interface, is an important facet to consider before purchasing an RFID reader, especially before developing software. A carefully selected API allows for more seamless communication between the hardware and software/middleware.

Each manufacturer has its own API, so it is important to 10 investigate which API may be the best fit for a specific development environment.

If assistance is required to gain access to a particular manufacturer’s API, please  contact us to see if we can assist.