While everything from dating to shopping has moved online these days, there are still individuals in the world who believe society needs to come together in-person.

In that spirit, putting RFID into our games may seem counter-intuitive. After all, isn’t this the same technology that allows us to track our tomatoes from thousands of miles away or even our snacks in outer space?

Yes, but RFID is also enabling the gaming industry to bring together players – and play – in a very intimate way. Just a few years ago, being able to watch along as someone plays his poker or Scrabble move, to really know what’s not only up his sleeve but in his bag of letters, would have seemed impossible. Now, this feat is not only possible but readily available thanks to RFID.

Hand on the button

What started with the virtual poker playing experience metamorphosed into Scrabble, largely thanks to Mind Sports International, a Plymouth, UK-based RFID game marketer.

The twist is that the modern Scrabble board involves RFID and being able to not only follow a player’s moves, but know whether there are any Q’s or Z’s left in that velvet pouch.

“We bring together multiple games so people can play them in a live environment,” says Dave Brannan, CEO of event management company Living it, Loving it, which is the parent of Mind Sports and which contracts with game manufacturers to meld in its own RFID technology. 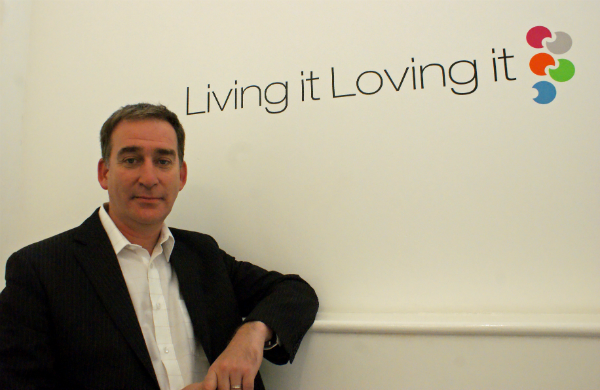 Dave Brannan is the CEO of Living it, Loving it.

“We believe people need to be together,” he says. “We know the poker industry very well, and we work with RFID cards and chips.”

Right now, the Scrabble game, licensed from Hasbro, is only available for tournaments, but the buzz is considerable: Brannan even hoped that the board would appear on Jimmy Kimmel Live! After all, on May 22, winners of the U.S. National School Scrabble Championship squared off in a competition with Jimmy and sidekick, Guillermo. The championship itself had been played on a Mind Sports Hasbro board.

The RFID Scrabble board boasts a bevy of cool features. “It uses an RFID technology-integrated dictionary,” Brannan says. “We made sure the dictionary and software were designed so people watching using an RFID board can see what tiles people have and know what words they could make.” 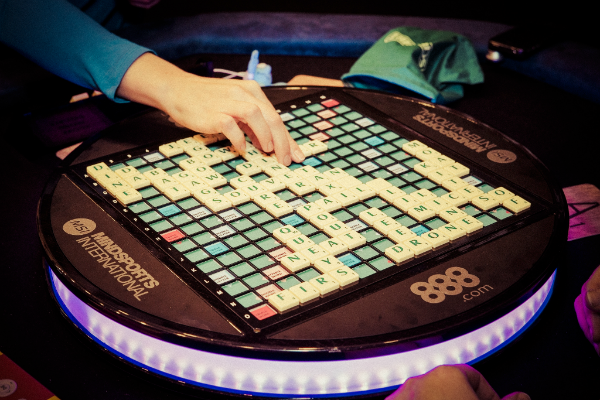 The RFID Scrabble Board contains 9 readers and 225 antennas.

He hopes to bring innumerable foreign languages to the experience, as obviously this is an international game – and experience. The company enjoyed a successful turn at the Prague Mind Sports Festival in 2013, for example, just one of many parts of the world interested in this play-along type of board game.

The board itself touts nine RFID readers and 225 antennas that allow viewers online to follow along with the plays. A passive 13.56 MHz tag under 10 cm is embedded into each tile, a technology developed by IB Technology in the UK.

At the Prague event, Mind Sports drew approximately 20,000 viewers, Brannan claims, and under the glare of such pressure “the speed had to be right.” Using multiple readers, the game was able to hum along and progress at lightning speed – and then some.

If there was a delay between the player’s move and the viewer’s sense of it, it wouldn’t look right, he says. “The 225 antennas had to work together at massive speed.”

Brannan says that 18 months ago, he looked at the notion of bringing RFID into the game from a “marketing point of view”. He could see that being able to connect the game via a live broadcast would be transformative. So he and his partner, Simon Dingley, got together, and then culled data from user groups.

Although the budget went three times over what he says they originally planned, it was well worth the investment.

“Mostly it was just poker that had had RFID, and we had looked at other games, like chess, but it was [Scrabble] that made more sense,” he says.

“RFID is a technology I feel is under-utilized in gaming industries. It’s growing greatly [though],” Brannan says.

Indeed, RFID is being used ubiquitously in the gambling industry, from Vegas to Atlantic City. Casinos want to keep track of their investments, and RFID is proving the way to do that. Macau casinos are buying up RFID chips in record numbers, too, with sales of RFID chips and readers on a definite uptick worldwide. Gaming Partners International, clear back in June, 2006, issued a press release touting that it had “ramped up its production facilities and number of employees in order to meet the increased demands from the Macau casinos, both in the volume of orders and in the delivery time requirements.” The company then touted that it had increased its number of employees by nearly 40 percent just since December 31 of the previous year.

The RFID chip and antenna coil inside a casino chip.

Moreover, GP said that based on its backlog at the end of 2005, they had already expanded production into France, the US and Mexico.

None of this would have come as a shock to Brannan or to Dingley, who heads up the tech team. And as they move forward, perhaps to an even more virtual experience where one is not only watching what’s in the bag but playing along at home, those crack tech skills of Dingley’s will come in handy.

After all, he had to combine hardware technology and RFID technology before he “dropped an entire world’s dictionary” into a database that had to then “read, search, sort and connect [everything] together,” according to Brannan.