Available on the iPhone since the iPhone 7, NFC capabilities are now being unlocked for iPhone users with the iOS 11 update. With Apple’s new framework, Core NFC, users will now be able to read NFC tags using their supported Apple devices. Previously only used in Apple Pay, the NFC chip residing in iPhone 7 and up will now be able to read most any NFC tag in NFC Data Exchange Format, or NDEF. 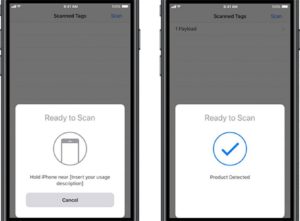 Approved as an ISO/IEC standard in 2003, Near-Field Communication, or NFC, has grown into one of the key technologies involved in inter-connecting smart devices and appliances everywhere. NFC on the 13.56 MHz frequency band facilitates communication through magnetic coupling between devices, ranging from near contact to about a few centimeters. To learn more about how NFC works, click here.

Another restriction by Apple is that NFC tags can only be read in 3 rd party applications such as Facebook and Amazon, and the read must initiated by the user. This restriction differs from Android devices that are always ‘listening’ for an NFC tag in the background.

Even with some restrictions – below are some cool things you can do with the NFC functionality provided by the iOS 11 update.

Using NFC with a supported Apple device and the iOS 11 update, users can learn about their NFC-tagged surroundings - whether that be in grocery stores, museums, or retail locations. Some products are currently manufactured with NFC tags and, when they are tapped, can explain product features, or for food items, provide users with relevant recipes or nutrition information. Museums, such as the Museum of London, feature exhibits with NFC tags enabling visitors to learn and explore using their smart devices and potentially interact with displays.

Smart Posters and displays with NFC tags can not only inform visitors about a product, service, or feature, but also give them relevant links or videos for them to go to learn more or sign-up for other actionable items.

In the Future: Go

Perhaps in future updates, the NFC capabilities on the iPhone could take the place of transit cards or bus passes and allow a “touch-and-go” system all centered around a smart phone.  Currently the card emulation constraints reported by Apple restrict the iPhone for being used for this purpose, but some transits or subways already offer this with Android phones. Hopefully, this could be an ability for the iPhone in the near future.

To read more about NFC, check out the links below!