What is the Internet of Things?

Since Kevin Ashton first coined the phrase in 1999, the definition of IoT has evolved over the years. Initially, it was used to describe the limitations in the relationship between the internet, computers, and the physical world. Ashton was describing how nearly all the data available on the internet originated from a human. With available and emerging technologies, Ashton believed information about things need not be dependent on a manual interaction; it could be an automated process.

UPDATE 1: On January 2014, Google announced they were acquiring Nest for a whopping $3.2 billion in cash. That's a ringing endorsement for the internet of things movement. Google already dabbles in driverless cars and personal robots, so with the Nest acquisition, they are bringing a wealth of automation and product talent under the Google umbrella. Larry Page, CEO of Google, envisions a future where the Star Trek computer is a reality, and he obviously wants Google to be the central nervous system powering our smart products.

UPDATE 2: In April 2014, Zebra Technologies purchased Motorola's enterprise business for $3.45 billion. That's a very bullish stance on the internet of things, especially in the enterprise industries such as healthcare, manufacturing, logistics, and retail, among others. Zebra is mostly known for their barcoding and RFID printers, but in recent years, they have been venturing into the internet of things with their Zatar platform, which is billed as a social network for enterprise devices. With the Motorola acquisition, Zebra will now offer a full suite of mobile RFID devices bringing the internet of everything to the modern workplace.

Update 3: On June 02, 2014, Apple unveiled HomeKit at WWDC, their annual developer's conference. HomeKit is an API feature for iOS that allows users to control smart devices with their iPhone. Apple's platform-first strategy is an interesting approach to joining the internet of things and smart home market. However, it gives third-party developers simple tools to integrate the iPhone with home automation devices currently on the market.

Update 4: On March 16, 2015, Microsoft announced at the Convergence conference that the tech company will be releasing version of Azure and Windows 10 specifically for the Internet of Things. Microsoft hopes its Azure service will be the go-to cloud based hosting platform for IoT devices, while at the same time hoping those same devices are using Windows 10.

Update 5: On May 19, 2015, famed Silicon Valley venture capital firm Andreessen Horowitz led a $25 million first round funding of IoT startup Samsara. The startup will focus on creating sensors for the internet of things.

Update 6: On May 28, 2015, Google debuted two IoT platforms, Brillo and Weave, at its I/O Developers Conference. Brillo is a derivative of the Android operating system designed specifically for the smaller footprint of IoT devices. Weave is a standardized communications layer for IoT devices mean to enable machine-to-machine communication for devices on the same network.

The Internet of Things requires a few necessary components to enable communication between devices and objects. Objects need to be augmented with an Auto-ID technology, typically an RFID tag, so that the object is uniquely identifiable. Also, an RFID tag allows the object to wirelessly communicate certain types of information, which leads us to another requirement - the ability to monitor data.

Truly smart objects will be embedded with both an RFID tag and a sensor to measure data. The sensor may capture fluctuations in the surrounding temperature, changes in quantity, or other types of information.

As mentioned previously, wireless communication is an important feature. While wired communication doesn't preclude an object from being part of the Internet of things, it does limit that object's range of motion and general usefulness. As the smart object reports data, the information travels over IP networks to a central database which stores and sorts the data into a human-readable format.

Why do we need the IoT?

With objects reporting data in real-time, users have the ability to make quicker, more accurate decisions. In the supply chain, managers will be able to monitor the status of shipments like a crate filled with fruit. With sensors, RFID tags, and RFID readers, the manager sees in real-time the exact location of the crate inside the warehouse, the fruit's point of origin, days until expiration, and temperature.

A visible, transparent process improves efficiency, reduces waste, and allows traceability. If a shipment is determined to be unsuitable for consumption due to disease or other circumstances, the source or cause of the defection will quickly be discovered because of the great wealth of information available.

Internet of Things proponents point toward the interconnected home as the ultimate application, or killer app if it were. Home automation is a growing industry, yet still leans toward the hobbyist and not the everyday consumer. Products like Nest, a smart thermostat which adapts to the user's preferences, are introducing the concept of home automation to the general public.

With objects tagged with RFID or NFC chips and paired with an Internet of Things application, consumers can improve their everyday well being and even save time and money in the long run. A grocery list could be automatically populated as produce nears its expiration date or nears complete consumption. An accurate, real-time list reduces waste as the consumer doesn't purchase unnecessary items which leads to an overabundance of items with nearing expiration dates. 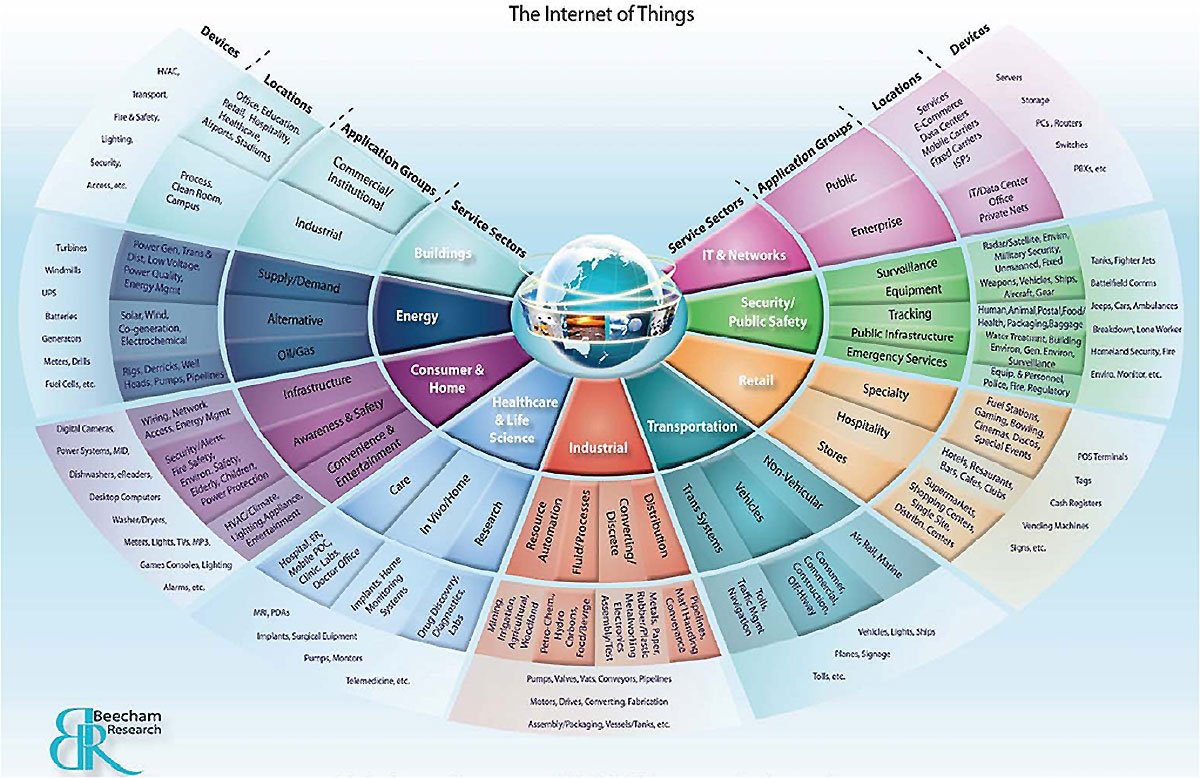 IoT has many applications in healthcare as well. Smart prescription drug bottles and cases could send reminders to the consumer promoting prescription adherence. In a nursing home, wearable patient monitors could update in real-time the electronic records stored on a doctor's secured tablet. Accurate, automated, and real-time information is a key feature of IoT applications.

The adoption of RFID and other similar technologies is spurring innovation and the development of the Internet of Things. IP networks are commonplace throughout households, offices, warehouses, parks, and many other places. Industry and government mandates are regulating technologies leading to accepted standards across industries allowing for interoperability among devices. Additionally, the cost and size of devices continues decreasing which allows companies to embed smaller, common items with RFID chips and sensors.

Have you experimented with the internet of things or do-it-yourself home automation projects? Share your experiences in the comments below.

To read more about RFID and IoT, check out the link below!