How RFID is transforming not only how races are timed, but how we race. 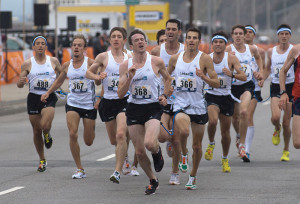 Back in the dark ages—the eighties—this reporter enjoyed running a little race called the Bay to Breakers in San Francisco. Midway through the seven-and-a-half-mile course, our photos with numbers emblazing from our “bibs” were recorded by a camera as we raced through Golden Gate Park.

Those were the days.

No one could have foreseen the level of sophistication that would infiltrate the racing world, let alone the plethora of companies that have flooded the market since RFID was introduced in the ‘90s.

And like all relatively new marriages, RFID and racing is both exciting and challenging. The participants in the field appear to be passionate about what they do, but acknowledge the basics: as with your home laptop, technology is only as perfect as luck or the person operating it. For starters, one needs a backup power supply, such as a battery pack, before that gun is fired.

The term Ultra High Frequency describes a discrete part of the electromagnetic waveband used when employing RFID, and it’s no more popular than in the world of human racing. On other types of courses, such as the horse track, times are recorded by sophisticated cameras set up at the finish line. However, when it comes to timing the speeds of hundreds or thousands of runners, obviously such a tactic would be impractical.

One race timing professional in the Northwest said, “We use UHF RFID readers with different configurations of antennas based on the race course.”

This person chose to remain anonymous, in itself indicative of how busy and competitive the field has suddenly become.

Using UHF can also mean problems when it comes to racing. After all, how can one accurately read a racer’s time when there is no so-called “sharp edge” or exact marker for the read? Instead, signals create a read that can occur a few meters before or after the foot actually hits the mat.

The source said that the industry really does have a long way to go in terms of assuring reliability, and the need has never been greater to provide such assurance. The source views the reliability requirement for RFID timing systems as higher than for RFID systems in other industries.

To achieve this requires contingency planning on all races.

“The reliability is usually achieved by thorough testing and redundancy. A good race timer has at least two of every component,” the source says.

Alluding to “one of the better known RFID timing systems” that nonetheless recently had issues with 3,782 participants at the Standard Chartered Singapore Marathon “indicates even the latest RFID timing systems have a ways to go in reliability”.

His company uses a chute and an inflatable arch, and then they have two sets of timing mats at the finish line “for redundancy.”

“We use timing mats with linear threshold antennas that are low profile so that they fit inside our mats,” he explains. “We also use circular antennas at the finish to pick up tags that are no longer in a vertical position, since our linear antennas are polarized and are looking for vertical tags.”

If it sounds like he’s a former IT guy, that would be a correct assessment.

Childs says that antennas are connected to RFID readers that are also connected to a network router. “This, in turn, is connected to a laptop via an Ethernet cable. We developed software to read the tags and calculate finish times and produce results for the race director.”

Then when a runner crosses the finish, Orion reads the RFID tag and matches an embedded code with the code in their database.

“This determines the name and age of the runner,” he says. “This is used for age group placement as well as overall placement.”

Childs explains that the industry still has a long way to go before it can feel secure.

“The single biggest challenge is capturing every runner as they cross the finish line,” he says. “There are many factors that can affect our ability to capture their time. The biggest problem is the runner themselves. The human body is mostly made of water, which has a negative effect on the ability of the tag (timing chip) to be read by the antennas.”

To minimize this potential problem, Orion Racing employs a foam spacer between the runner’s bib/race number and the runner to keep the tag from resting against them.

“Another option is to have the runners place the tag on their shoe. We use a Tyvek band with a tag attached. The runner feeds it through their shoelaces to form a loop. This creates a space between their body and the tag,” Childs says.

That’s pretty much it. “If we can capture them crossing the finish line then we are able to produce valid results.”

To read more about RFID Race Timing, check out the links below!